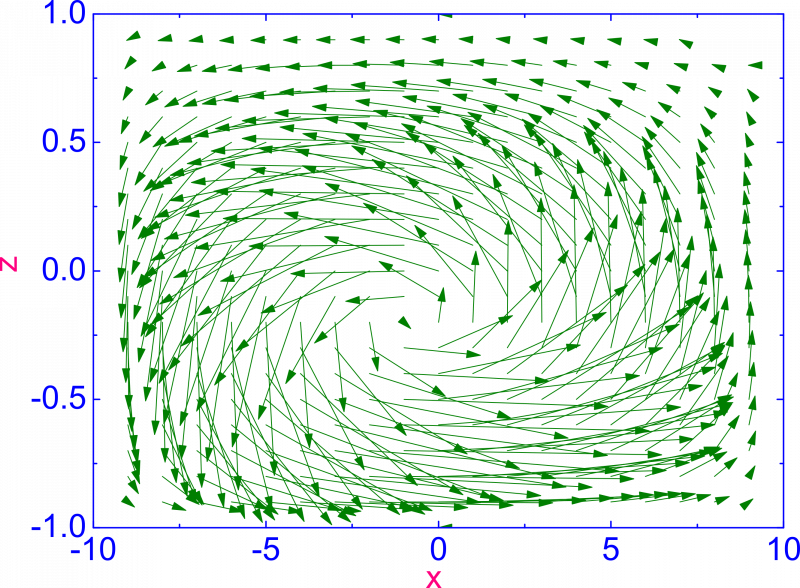 Pressure gradients and an external electric field for controlling fluid motion are traditionally generated by mechanical, thermomechanical, or electrical drives. On the other hand, the liquid crystals are extremely sensitive to external stimuli and therefore can be used for the construction of stimuli-responsive devices, such as sensors or actuators. They have various advantages in comparison with other types of microsensors and microactuators; simple structure, high shape adaptability, easy downsizing, and low driving voltages. Nematic droplets of the appropriate size, confined in a cylindrical capillary or channel, are micro-devices, the orientation of the molecules of which can be manipulated not only by the electric field or pressure, but also by the temperature gradient ∇T. This gradient can be generated, for instance, by a laser beam focused both in the microfluidic volume and at the boundary of the LC channel.

One of the principles of liquid crystal pumping is based on the coupling, on the one hand, between the gradient of director field ∇n and the temperature gradient ∇T, excited, for instance, by a laser beam, focused both at the boundary of the LC channel and inside the LC microvolume, and, on the other hand, between ∇n and the velocity field v, excited in the microfluidic channel by the laser irradiation.

The complex dynamics of dissipation processes was revealed during the study of the reaction of liquid crystal material confined in thin and ultrathin channels due to locally formed temperature gradients. Several scenarios for the formation of hydrodynamic flows in microsized hybrid aligned nematic (HAN) channels, based on the appropriate nonlinear extension of the classical Ericksen–Leslie theory, supplemented by thermomechanical correction of the shear stress and Rayleigh dissipation function, as well as taking into account the entropy balance equation, are analyzed. Detailed numerical simulations were performed to elucidate the role of the heat flux q caused by laser radiation focused on the lower boundary of the equally warmed up the HAN channel containing a monolayer of azobenzene with the possibility of a trans-cis and cis-trans conformational changes in formation of the vortex flow v.

It is shown that a thermally excited vortex flow is maintained with motion in a positive sense (clockwise) in the vicinity of the orientation defect at the lower boundary of the HAN channel caused by the trans-cis and cis-trans conformational changes.

We have described a novel mechanism of a kink-like and double π- forms of distortions of the director field n in a microsized nematic volume, confined between two infinitely long horizontal cylinders with a radial temperature gradient ∇T, under the effect of a voltage U applied between cylinders. It is found that, on the one hand, under certain conditions, in terms of curvature of cylinders κ and the voltage U, the torques and forces acting on the director n may excite the kink-like distortion wave spreading along the normal to both cylindrical boundaries, whose resemblance to a kink-like distortion wave depends on the value of applied voltage U and the curvature of the inner cylinder. It has been worked out, on the other hand, the conditions, in terms of κ and U, producing the distortion mechanism of the n in the double π-form, with the intermediate relaxation wall.